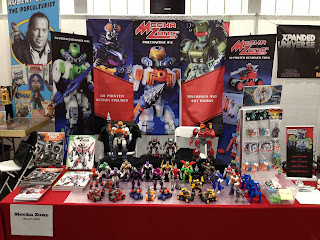 Dear friends, today we have the opportunity to make an interview with the creator of the fantastic “Mechanauts”: David White!

Fantascienza&Co: First of all I must say that I know your art because some years ago I created the name Mechanauti, that is the Italian for Mechanauts, and one day I googled this name and I found your creation. So what’s your inspiration for the Mechanauts?
Hello and thanks so much for the opportunity to talk about my creations. My inspiration for the Mechanauts was older toys from the 70s and 80s such as Micronauts, Diaclone, and Transformers. I like a lot of different toys from that era, but the science fiction toys have always been my favorites.

F&Co.: may you tell us something about you and your career as an illustrator?
My career as an artist started back in 1995 after I graduated from the Columbus College of Art and Design. I got a job making computer games for a company called Cyberlore Studios. We made a lot of PC games such as Majesty the Fantasy Kingdom Sim and a couple of MechWarrior 4 sequels. I was responsible for creating concept art and making the in-game art too. I started doing freelance work for LEGO while I was at Cyberlore. I created more than 200 pages of comics for LEGO Magazine over about 9 years. Cyberlore closed in 2005 and I became a full-time freelancer. I illustrated more than 20 Hot Wheels books and several LEGO Star Wars books for Scholastic as well. It was a lot of fun!

F&Co.: and what about today job as a mecha designer apart from Mechanauts?
I’ve had some fun mecha design jobs over the years, but they are infrequent now. I modified many old designs for the MechWarrior 4 PC games and also got to create a few new designs. I then started working on the Battletech miniatures game. I still create drawings for those sometimes. Here are many of the drawings I have done for Battletech.
http://www.sarna.net/wiki/Category:Works_by_David_White
Another highlight was when I got to do concept art for the Nintendo DS version of Transformers: War for Cybertron. I loved doing that J

F&Co.: Let’s talk about your awesome Mechanauts: can you tell us something about your production process? How do you work and which are your job devices (3d printer, resin materials, etc.)?
I use several 3D printers to make my figures. I prefer a brand called Afinia because their machines have been very reliable and cost effective. They are extrusion type machines and I use ABS plastic. Making the toys takes a lot of time. THE 6 in Mechanauts have around 75 parts and all those parts take about 20 hours to print. After the parts are printed, I have to remove support material and assemble everything by hand. The last step is an acetone treatment that smoothes the surface of the pats and makes them shiny. I’m working on a series of videos for my YouTube channel to show my entire process.
https://www.youtube.com/user/mechazone 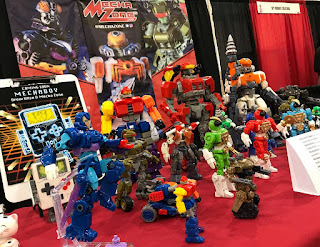 F&Co.: Are there some other Mecha Designers or Toys that inspired your art?
I think most of my inspiration comes form anime and old video games. There are a lot of amazing toys so of course I am always studying them. I like to make homage toys for older designs that never had a toy release. My recent Slugger mech was based on a game called Metal Slug, which never had any real toys made. I think the nostalgia is fun for many people.

F&Co.: I see that Tomy is doing a really god job with the new Diaclone (Dianauts) af: will you create more af compatible with them like the Epsilon Buggy?
I love the new Diaclone toys! I wish I could afford the new Big Powered set, but it is too expensive for me. I doubt that I’ll make any more toys that are compatible with Diaclone. Maybe I’ll make some of them work with the 1 inch pilots but that will be all. My Epsilon buggy, which can be combined with the new Diabattles, was a lot of extra work. Not many people even know what Diaclone is and that feature was unrecognized by most of my fans. I would rather spend my time on features that more people can appreciate.

F&Co.: I see your  wonderful Battletech drawings: are you a wargame fan?
Honestly, no, I don’t like wargames. I’m not a fan of tabletop games of any sort. I’ve only played Battletech once and I did have fun because of all the other awesome players, but I prefer shmups and platform action games.

F&Co.: What about your future project? Will you improve your business opening a Mechanauts factory? (If the answer is Yes, please consider me as a Production Manager !!^_^).
I’m always developing new toys when I can find time to model. I have a newly modeled Predanaut, the Mechanauts enemy, which I will be releasing in a couple of months. I wish I could mass produce in a factory but it is impossibly expensive. Just making the metal molds for one figure costs about $25,000! That doesn’t include all the modeling time to make it work with that process instead of 3D printing. It also doesn’t include the plastic and other production costs such as shipping the parts from China to the USA. I have a dream of using Kickstarter to fund mass production… but who knows if I can ever make that happen?

F&Co.: is there a Sci Fi saga you like most about? If yes, why?
Wow, this is a difficult question for me! I don’t read much but I do watch a lot of sci-fi movies and even more anime. I’ll watch just about anything with giant mecha in it! I’m not the sort of person who categorizes things into favorites. Just things I do and don’t like.

F&Co.: May you tell us if you have some other hobbies?
Drawing and video games are my hobbies. I am really into retro gaming and I have a Neo Geo arcade cabinet in my studio. Unfortunately I am always working and don’t have much time to play. I do most of my drawing in March and October when I participate in the drawing events, March of Robots and Inktober. I always post those sketches on my @mechazone Instagram account. 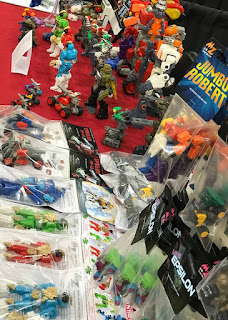 F&Co.: What about your future project?
As I mentioned above, I have a new enemy action figure coming up. I also have a robot figure called Jumbo Robert coming out very soon. Jumbo Robert is a tribute to an old 1980’s cartoon called Mighty Orbots. After that, I want to try and update my old Bag o’ Bots product with new joints and more variety of parts that can be interchanged. I would also like to make a female Mechanaut if I can find the time to concept and model something fun.

Thank you very much Master David and we hope to see you again in this blog for another interview!
Website:
http://www.mechanauts.net/